Use Value Stream Mapping to Create Flow, Not PowerPoints!

Sometimes we just make things way too complicated. My grandfather would say that some people “are educated beyond their intelligence!” I think that he means that we can often be too smart for our own good, especially when it comes to the application of many of the performance excellence improvement tools such as value stream mapping. 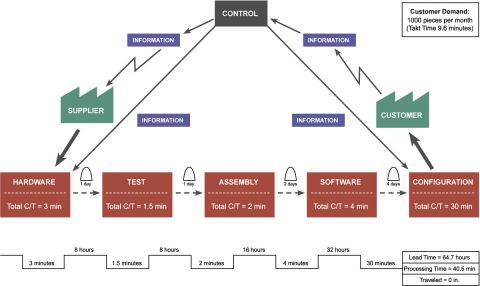 The value stream map, or VSM, has actually been around since the early 1920s, but didn’t obtain modern popularity until the late 1990s. It’s an exquisitely simple tool to be used but for one main purpose… to identify the disruption in the flow of value. That’s it. The map indicates all of the stoppages and slowdowns that prevent clean, efficient flow through the process. This disruption often leads to an organization’s inability to meet the needs of its customer.

To that end, I think there are eight basic questions that should always be answered with the completion of the mapping exercise.

8 Basic Questions to Answer During a VSM

The value stream map is an exquisitely simple tool to identify the disruption in the flow of value.

I know that there are many more issues that can be addressed and documented but for my money, if you can quickly answer these eight and then drive towards their systematic resolution, you will be in the flow of things while others are still trying to figure out which font to use for their PowerPoint presentation!

Wes Waldo is COO and President, Americas at the Lean Methods Group. He is also the author of A Team Leader’s Guide to Lean Kaizen Events.